Cure for Psoriasis through Ayurveda

Thousands are affected by psoriasis and many go in search of English medical treatment. However, the Veteran Ayurveda Specialist, Doctor N. Nafeesdeen states that many are unaware that psoriasis can be cured only by Ayurveda, Sidhha, native medical treatment.

Here’s an account of Psoriasis according to Dr. Nafeesdeen of Kalawawa, Sri Lanka: 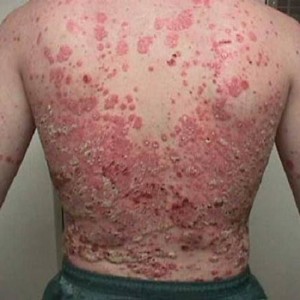 God’s unique creation is man. Skin is the most beautiful attire for humans. Through psoriasis, scales drop from the skin of a human body and is a disease that is in the forefront of destroying this beautiful skin.

Among skin diseases, it is dreaded and feared next to leprosy. In the initial stage of this disease, the head starts dropping dandruff like fragments and the skin begins to drop scales.  People mistake this to the dropping of dandruff. Although it does not look alarming initially, carelessness can make the disease spread all over the human body and cause blood to ooze from the skin.

Ayurveda calls it “KITIBHA” and in the Sinhala Language it’s called පොතු  කබර  because of its similarity to fish scales.  In general, the following parts of body are affected:

Psoriasis on the hands

The back, back of the hands, front side of the legs and head.

Having no knowledge o this particular disease, a kind of fear and doubted questions arise. This however, leads to an incorrect approach.

Lack of understanding of this disease has led to suicide, hindered marriages and broken marriages.

Is psoriasis a genetic disease? Yes, it’s true to a certain extent. There’s a 50% possibility for a child to inherit this disease if both parents had been affected.

As traditional Ayurveda believes, many types of skin diseases are caused by poisoning or allergy. This applies to psoriasis as well.

If a patient of psoriasis is wounded or bruised, there is a possibility for the patient’s ailment to spread further.

Spotted psoriasis that generally affects children is known to increase due to bacteria that causes coughs and colds.  Such children, can be cured by treating these germs.

Some kinds of psoriasis reduce during pregnancy and in some cases, it aggravates. This signifies that hormones have an impact on this disease.

It’s know that 90% of psoriasis patients are subject to depression which in turn aggravates the disease. Therefore, patients should keep calm, have a clear mind and be joyful in order to control this disease. Sidhha native medicine states that a distorted mind condition and past sins can cause psoriasis.

1.  Pain and swelling in minor and major joints.
2.  Dropping of scales from the skin that lead to wounds and oozing of blood.
3.  Finger / toenail decay.
4.  Nails turn yellow and break.
5.  Distortion of skin and skin gets rough.
6.  Affects the hair.

When psoriasis begins to heal, some experience indigestion and stomach ache. It disappears as the disease rises again.

Some fear this as a sexually transmitted disease because certain parts of the body are affected by psoriasis.  Namely, anus, vagina and other private parts.  As a result, it is always advisable to obtain a medical blood checkup or test to identify the disease.

The healthy way of avoiding this disease is to consume fruits, green leaves and raw vegetables.  Morning sun, evening sun and cold water bath will also contribute towards the patients recovery.

Theme by Anders Noren — Up ↑